What is the most typical expression for “left” (as in, the physical location that is opposite of “right”) in Maninka?

In the Malidaba Maninka dictionary, the term “maranbolo” is listed as a noun meaning ‘left’ and there is no mention of numanbolo (a form that is very common in Bambara). 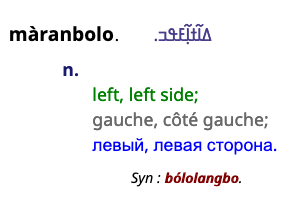 In the Latin-based Maninka reference corpus, the term maranbolo is attested 18 times, but only in a Christian Bible translation.

In the N’ko-based portion of the corpus, it appears, but only 6 times.

In the N’ko portion of the corpus, numanbolo appears 49 times.

But it appears 0 times in the Latin portion.

In the book “Parlons Malinké” (by Mamadou Camara), he lists “numanbolo” for gauche.

In Bamba’s 2013 Maninka lexicon, he lists only numanbolo and no entry for maranbolo.

It seems then that the Malidaba dictionary is potentially misleading in listing maranbolo, but not numanbolo for ‘left’.

Can any Maninka speakers offer anymore insights of what they hear or use most frequently?

For what it is worth, I’ve been told by a Maninka-speaking friend from Guinea that both are said, but that more people say maranbolo.

(I also reached out to some academic linguists and will post a summary of their comments soon!)

Here’s what some other academic linguists on the Mandelang listserv pointed out:

While this interesting context, none of it answers the question of which word is more typical in spoken lingua franca Maninka in Guinea. Both màranbólo and númanbolo appear in Grégoire’s 1986 lexicon for Maninka of Kankan. As such, I think that beginner students of Maninka should simply learn both:

Ive only heard bolo maran in hamana. My friend from Sankaran uses ‘maran’ too

A post was split to a new topic: Maran