I was also very often reminded of that whiteness by locals who would refer to me as a white person despite me being mixed (Tubabu became my most hated word in dioula lol, if you know the word for mixed please let me know!)

One term that comes to mind, but that I haven’t heard outside of N’ko circles is jaatara (ߖߊ߰ߕߙߊ jàatara), which I learned through the writings of Sulemaana Kantè and is also found in the Malidaba Maninka dictionary.

Another caveat is that the term may be potentially pejorative in some contexts or to some ears; I’m just not sure! Here’s an example that I found in the Maninka corpus (and which happens to be the book, Dalu Kɛndɛ by Sulemaana Kantè, from which I learned the term); note the context is Kantè speaking about the racism of White male Westerners, etc., that spend time in West Africa and have children:

‘They don’t in any circumstance agree to marry our daughters and take them to their countries; even their mixed-raced children (“mestizos”), they disavow them and their mothers and leave them to be mocked here’

Note that Kantè glosses the term jaatara with the French métis for his reader, so that might indicate that it was a term that wasn’t widely used or known when he wrote.

In any case, that’s one potential term that could be helpful!

I’d be curious if anyone is familiar with the term or similar cognates in the different Manding varieties.

I have also heard metisi.

I dansɛ, Malik! Welcome! Thanks so much for joining the forum

Also thanks for chiming in on this thread!

You’ve brought up a good point that I didn’t mention: many people these days will simply use the French loanword metisi (< Fr. métis). I didn’t bring it up before because I knew that the commentor on YouTube was looking for a non-French borrowing, but your response will be helpful for others!

Loanwords are tricky since we need to decide on whether they are used spontaneously or if they are in fact integrated into the language (and therefore would be included in a comprehensive dictionary, for instance).

In the case of metisi, I had a look in the Bamadaba dictionary and it’s absent as of 2020-12-10. That said, I looked in the Bambara Reference Corpus and there were 15 hits. Here’s a screenshot of them for reference:

The fact that the word appears in written texts a few times too provides additional evidence that we should consider metisi a word that is “integrated” into Bambara from French.

Interestingly, one of these examples though offers up another word that a particular Bambara language writer coined in a poem about Soweto and South Africa: naaminɔɔrɔ.

Here is a screenshot of it as it appeared in Kibaru issue 124 on page 6 (I’ve included the introductory paragraph and the following paragraph for context : 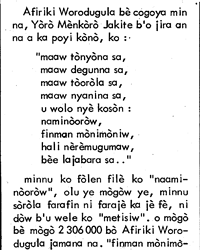 Naaminɔɔrɔ appears to have been a term of the poet’s choosing since the Kibaru journalist then wrote an explanation after the poem excerpt:

'Those mentioned as “naaaminɔɔrɔw”, they are people resulting from relations between Black and White people, which some call “metisiw”.

The journalist’s explanation (from 1982) suggests to me that metisi has been the most commonly used term for quite some time now.

Adding to possible original meanings or origins of jaatara, a YouTuber commenter added the following:

Curious if anyone else can confirm this!